I’m a creature of habit. I like to go back to vacation spots I’ve visited before (I am not allowed another trip to Paris before I go to a new European city). I like to return to attractions and sites and parks I know, especially if I bring people along who have never been (I’ve been to Disney World in Orlando eleven times). And I tend to rewatch favorite television shows and movies and reread favorite books rather than watch/read new. (an old roommate once told me, in a completely non-snarky fashion, that it’s because the characters become my friends, and I think she’s right).

But I do like new experiences, really. I just have to push myself to have them and not to fall back on the comfortable and familiar. Join me as I try to consume the new as well as the old, and each month, I’ll give you my thoughts on some of the best I’ve discovered. END_OF_DOCUMENT_TOKEN_TO_BE_REPLACED

Why Bridesmaids Doesn’t Deserve to Be Compared to The Hangover

I watched the Oscars last night, along with everyone who wasn’t watching some sort of basketball game. The cast of Bridesmaids was highly entertaining as they presented awards for Best Short Film (Live Action), Best Documentary (Short Subject) and Best Animated Short Film. They were funny, irreverent, and looking gorgeous all at the same time. And that, ladies and gentlemen, is essentially all Bridesmaids is, as well. END_OF_DOCUMENT_TOKEN_TO_BE_REPLACED

Supernatural: Wendigo/Dead in the Water

So I realized after watching the first couple of episodes that I’m going to need to increase my basic knowledge of the supernatural in order to really feel like I’m getting the richness of this show. I’ve got vampires, were-beasts, and zombies covered, but a wendigo? Thank goodness for Wikipedia. END_OF_DOCUMENT_TOKEN_TO_BE_REPLACED

When I was in college, I saw the movie The American President, starring Michael Douglas and Annette Bening. I had recently discovered that I had an interest in politics, and when we walked out, it was Michael J. Fox’s character, the domestic policy advisor, whose job I wanted. He got to write the speeches. And they were doozies. END_OF_DOCUMENT_TOKEN_TO_BE_REPLACED

The Human Side of Power 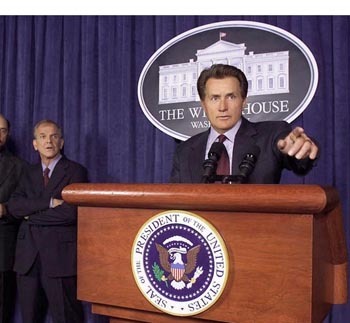 It would be impossible to have a President’s week on a site that discusses creativity and storytelling without discussing the West Wing. Aaron Sorkin took television by storm in 1999 with this drama about fictional President of the United States Josiah “Jed” Bartlet and his senior staff, taking us inside the west wing of the White House and captivating audiences for seven seasons. But what is it about this show that is so compelling? END_OF_DOCUMENT_TOKEN_TO_BE_REPLACED

JFK swearing the oath of office

Like kings and queens, Presidents have long fascinated writers and audiences alike. The Office holds power, but restrained power, meaning that the President is doomed to be perpetually frustrated by the gap between what he wants to accomplish and what he can accomplish. The Office brings with it celebrity but also criticism that is rarely heaped upon even the most downtrodden Hollywood star, putting to the test an individual’s self-confidence and ability to perform knowing that half of his audience is guaranteed to be angry with his choices. A President’s private life is exposed to the public, putting a strain on his relationships with his family. And…oh, yeah, there’s that thing where he’s got a metric boatload of responsibility for the fate of a world superpower.

With all the conflict situationally embedded within the Office, it’s no wonder that the President regularly appears as a character in stories. In some cases, an actor will personify a real President in cameo, lending a sense of reality to a fictional story. Other times, an actor will portray a real President in order to make a comedic point, as in the countless SNL skits mocking our esteemed leaders. Most interesting, however, is when a story features afictional President as a main character.

Making a fictional President allows us to test situations a real President might find himself in (admittedly, some of these are a little unlikely to occur) and see what he (or she…we can hope, right?) is made of. Presidents are, after all, just people, and people have limitations. Pushing a character to those limitations and allowing him to rise or fall is the meat of a good story. Pushing the stakes as high as possible — to, say, the fate of a nation — is the gravy.

I love television. I especially love excellent television, but I can find the good in many things (except, perhaps, season 4013 of the Jersey Shore, Jersey Nursing Home). Because people who know me know I love television, I am constantly getting recommendations for shows to watch. Trouble is, there are too many shows, and there are other things that occupy my time, like hiking or having dinner or writing.

Thank god for the existence of Netflix and television on DVD in general. It allows me to catch up with shows that have consistently been recommended, and consume them in vast marathons, needle-to-the-vein style. On this site, I’ll be reviewing shows that I probably should have been watching all along.

One note about comments. Please try to avoid spoilers in the comments, as I’d like to try to experience these shows knowing as little advance story as possible. If you’re going to talk about spoilers, put SPOILERS at the top of your post in big letters.

First up is Supernatural, starring Jared Padalecki and Jensen Ackles. I like supernatural television in general — old school fan of Buffy and Angel, and The Vampire Diaries is my current obsession — and knowing this, many fans have been surprised I don’t watch Supernatural. So it’s time.

The first season has twenty-two episodes, which I’ll watch and review over the course of twelve weeks A.V. Club style: Episode One and Episode Twenty-Two will get their own posts and the rest will be reviewed two at a time. So here we go, starting with the Pilot.

END_OF_DOCUMENT_TOKEN_TO_BE_REPLACED

10 Things I Learned From Wedding Movies

Movies are the best places to learn life lessons, right? Based on that assumption, I’ve collected ten must-read principles drawn from the multitude of wedding movies out there. What do you think? Is there any reality to any of this, or are they all just silly? Did I miss any? Find out after the jump. END_OF_DOCUMENT_TOKEN_TO_BE_REPLACED

The Weddings of Friends, Part II

From "The One in Vegas"

To continue our journey through the many, many weddings on the television show Friends, what better place to start than the home of the quickie wedding? END_OF_DOCUMENT_TOKEN_TO_BE_REPLACED

The show Friends, which lasted ten seasons — ten seasons with a fully intact original cast — hosted a multitude of weddings or almost-weddings. When I sat down to research this piece, I had three in mind: Monica and Chandler (pictured above), Ross and Emily, and Phoebe and Mike. But there were many, many, more. These weddings each served very different purposes for the show. Come with me on a journey through the many Big Days Friends allowed its cast to witness, in chronological order. Because there are so many, we’ll do the first batch today, and the second batch tomorrow. Warning: SPOILERS after the jump. END_OF_DOCUMENT_TOKEN_TO_BE_REPLACED