← Welcome to Wedding Week!
The Weddings of Friends, Part II → 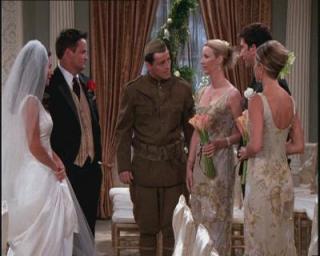 The show Friends, which lasted ten seasons — ten seasons with a fully intact original cast — hosted a multitude of weddings or almost-weddings. When I sat down to research this piece, I had three in mind: Monica and Chandler (pictured above), Ross and Emily, and Phoebe and Mike. But there were many, many, more. These weddings each served very different purposes for the show. Come with me on a journey through the many Big Days Friends allowed its cast to witness, in chronological order. Because there are so many, we’ll do the first batch today, and the second batch tomorrow. Warning: SPOILERS after the jump.

The Pilot (1.01): Looking back over the show’s ten seasons, it’s not surprising that the pilot began with a wedding that wasn’t. In the first scene after the cold open, 5/6 of the gang — Monica, Phoebe, Joey, Chandler and Ross — are sitting around the big orange sofa in Central Perk, discussing the demise of Ross’s marriage to the recently out Carol. In despair, Ross whines, “I just want to be married again.” Cue the entrance of Rachel Green, clad in — yes, that’s right — a wedding dress. Rachel had just run out on her own wedding after an epiphany that she didn’t want to marry milkmouth orthodontist Barry. This almost-wedding turns out to be an inciting incident for the series: Rachel has left her posh and secure life for one that she can call her own, moving in with her old best friend Monica and becoming part of Monica’s gang.

And so begins the story of six friends, navigating relationships and friendships and career. Rachel’s flight from her own wedding and her intrusion into the life of the other five answers the “what is different about today” question that writers must ask when they choose where to begin a story. Why is this day important? What has changed about the status quo? On Friends, it was Rachel’s entrance onto the scene. This entrance affects each of them in turn: Monica has a new roommate; Phoebe has to share Monica’s friendship with Rachel; Joey and Chandler have a new neighbor to entertain and steal food from; and Ross has a new potential love interest in the wake of his divorce.

Interestingly, it is that last point that makes Friends such a well-constructed serial narrative. The story opens with Ross wishing for love and Rachel entering on cue, arcs through ten seasons of yearning, relationship, breakup, friendship, and parenthood, until at last, in the finale, they reunite once more. Funny that Ross and Rachel’s wedding was not one of the “event” storylines, either on the show or in the lives of the characters…but more on that later. 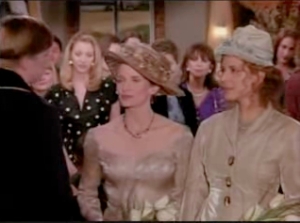 The One With the Lesbian Wedding (2.11): In Season Two, Friends went where almost no show had gone before (this was January of 1996, remember) and hosted a lesbian wedding. This was a self-contained episode rather than an event, meaning that there was no build-up to the wedding in previous episodes and no fall-out afterwards. The story is quite simple: Ross’s ex-wife Carol and her girlfriend Susan announce that they are getting married, and they want Ross to come. Ross is reluctant to attend, not because it’s a lesbian wedding, but because it’s his ex-wife’s wedding. At the last second, Carol considers calling off the wedding because her parents are refusing to attend, and Ross reminds her that she’s marrying Carol because they love each other, and not to make anyone else happy. He not only attends the wedding, but gives her away in the place of her absentee father, and all is well.

The wedding in this episode is not the story in and of itself, but rather the framework for the real story, which is about Ross’s acceptance of his ex-wife’s lifestyle. It also serves to further the B story, in which Rachel’s mother (played by the lovely Marlo Thomas) visits and drops the bomb that she is leaving Rachel’s father. Rachel struggles to accept this, and finally understands when Mrs. Green explains: “You didn’t marry your Barry, honey. I married mine.”

The C story, in which Phoebe’s body is partially inhabited by the spirit of an elderly massage client who died during a massage, serves to acknowledge the somewhat daring nature of the script. During the ceremony, the spirit, through Phoebe, declares, “Now I’ve seen everything!” and departs to the otherworld, freeing Phoebe. Interesting tidbits: the officiant for the ceremony was played by Candace Gingrich, sister of Newt; NBC received only four telephone complaints as a result of this episode, although it was bracing itself for a much higher volume.

The One With Barry & Mindy’s Wedding (2.24): Season Two closed with the wedding of Rachel’s ex-fiance Barry to her friend Mindy. As an audience, we had met both Barry and Mindy before (in an episode in which a recently new-nosed Jennifer Grey portrayed Mindy), but we didn’t care about their wedding. Like Carol and Susan’s nuptials, Barry and Mindy’s wedding was not the story in and of itself, but rather the setting for the real stories.

While Rachel has a solid storyline involving reclaiming her self-worth and jettisoning her former life for good (and the episode opens with Rachel in her hideous cotton-candy pink bridesmaid dress!), the real emotional resonance in this season finale comes from Monica’s May-December relationship with her boyfriend Richard (repeat guest star Tom Selleck). Monica, prompted by the wedding, decides to ask Richard about their future, only to discover that he doesn’t see himself having more children. Monica tells him she doesn’t need to have children, and that her relationship with Richard means more to her than being a mother, and they attend the wedding (why are they invited? I couldn’t tell) pretending that everything is fine. Ultimately, Monica realizes that being a mother is important to her, and although Richard vows to do the parent thing all over again if he “has to” to stay with her, she cuts him free.

Thus, the wedding here spurs the story into being, and then provides a poignant (and sometimes comedic) backdrop as it spins out. Also, we get to have fun with a wardrobe malfunction (Rachel’s bridesmaid dress ends up tucked into her underwear…), a karaoke version of “Copacabana,” and some wonderfully awkward Ross moments.

The One With Ross’s Wedding (4.23-4.24): Ross’s wedding to the Emily is the first Friends wedding that served as a longer storyline and an event. Midway through Season Four (4.14), Ross met Emily (ironically, because of Rachel) and they fell madly in love. After a whirlwind six-week bi-continental courtship (4.15-4.18), Ross proposed to Emily (4.19), and they began to plan a whirlwind wedding — in London.

This wedding served as a focal point for conflict in the second half of Season Four, driving Rachel’s character journey. She begins the season tentatively getting back together with Ross, but breaking up with him again by the end of the first episode. She then meanders through the early episodes, focusing on her career, until meeting a personal shopping client named Joshua, who she pursues with vigor fueled by Ross’s infatuation with Emily. Watching Rachel desperately try to have her own whirlwind romance so that she can compete with Ross and show him how “fine” she is painful and succeeds because of the comedic talents of Jennifer Aniston.

As the wedding approaches, Rachel’s plight becomes poignant. In a clipshow episode (4.21), Ross considers whether to invite Rachel, and Rachel considers whether to accept the invitation. In the end, she decides to stay behind with the very-pregnant Phoebe, and the rest of the gang flies to England. (For real…this was the first “on location” shoot for Friends).

Then the wedding episode itself, in two parts, was a nail-biter and full of surprising twists. The gang arrives in London, only to discover that the hall where the ceremony is to take place has been torn down a few days early, sending Emily into a panic. Ross manages to convince Emily that they shouldn’t postpone the wedding, and the festivities begin. Meanwhile, Monica is barely surviving as the butt of her mother’s “she’ll never get married” jokes, being mistaken by drunken British men as Ross’s mother, and feeling alone. She turns to Chandler for comfort, in one of the biggest surprises in the history of the show. While seeing them wake up in bed together the morning of the wedding shocked the viewers, it was also somehow organic. The chemistry between these two actors couldn’t be denied once it had been ignited, and became a centerpiece for the show in its remaining six seasons.

Back in New York, Rachel realizes she is still in love with Ross, and rushes off to London to tell him before he can make the mistake of marrying Emily (and is given an earful about what a terrible idea that is by guest star Hugh Laurie on the plane!). Once there, however, she sees Ross and Emily together and decides to hold her peace. But the twists keep coming, folks, as Ross mistakenly says, “I take thee, Rachel” instead of “Emily” during the vows. And that twist would fuel the conflict for both Ross and Rachel in the first half of Season Five.

That’s all for today, gentle readers. Check back in tomorrow for The One in Vegas, The One With Monica and Chandler’s Wedding, and The One With Phoebe’s Wedding and a discussion of what it all means.

← Welcome to Wedding Week!
The Weddings of Friends, Part II →