← Best of February
Giving in to the Mess → 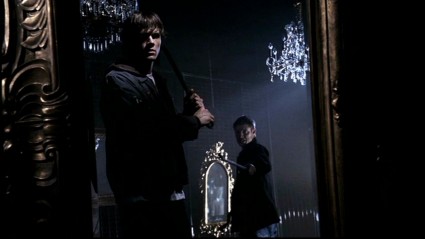 If we’re scoring these Season One Supernatural episodes by creep factor, Episodes 4 and 5 win for creepiest of the season so far.

Creature of the Week: Some sort of evil black floating gas — a demon, as it turns out — is possessing people on flights and causing plane crashes.

When I was a kid, I saw the Twilight Zone movie. It scared the bejeezus out of me (I was maybe six years old at the time), particularly the John Lithgow “Nightmare at 20,000 feet” segment. Just thinking about it makes me shiver. Is it any wonder, then, that Episode 4, “Phantom Traveler,” immediately brought to mind this Twilight Zone segment and brought my creep level from 0 to 100 in only a few seconds? As soon as I saw the guy who had been possessed by the black gas board the airplane, I thought, “Oh, crap.”

There’s something about being on an airplane that heightens the creep factor as well. The characters are locked in an enclosed space; the lack of an escape if something bad is inside with them enhances the terror. Even more than simply being in a windowless room or a cell, since the environment outside is hostile and the enclosed space is a delicate piece of machinery, if something goes wrong, that space itself is endangered. (You can get a similar effect from a spaceship, or a submarine.)

This episode uses the airplane in this way twice: first at the beginning, when the demon causes the plane to crash, and then in the latter part of the episode when Sam and Dean board a plane they think the demon will be on in order to find it and destroy it.

There is also some nice character development in this episode: Dean is afraid of flying, and Sam keeps it together. It was nice to see them reverse roles briefly, so that instead of Dean being the one with experience and know-how, Sam has to take charge and talk Dean down from his panic.

Aside from getting the boys dressed up in suits to play Homeland Security Agents (thank you, Supernatural writers), the other significant part of this episode is that the bigger story moves forward, if only a smidge. The boys get involved with the airplane demon case because a former client called their dad, and his voicemail said to call Dean. The boys are surprised, because whenever they’ve tried to call, the number was disconnected. And so the mystery deepens. I have a few theories, things that have been bothering me since episode 1, but I’m going to hold them in for now, see how things play out a little more.

Creature of the week: Bloody Mary, a ghost of a woman who died in front of a mirror and who can be summoned by saying “Bloody Mary” three times in the mirror, is killing people who were responsible for the deaths of others. Kind of a vigilante justice ghost, if you will.

Fake credentials: The boys pretend to be reporters, to be work colleagues of one of the victims, and to be shopping for an antique mirror, but they don’t pull any credentials.

If “Phantom Traveler” held more of a personal creep factor for me because of Twilight Zone nightmares, “Bloody Mary” is probably the creepier of the two. Why? Because the ghost in this episode can be called forth on a dare by a small child. This marks the first creature of the week who is voluntarily brought forth by people — even if inadvertently — and that makes it feel a little more real. As if I could walk into the bathroom and call her forth right now…wait, did I hear someone say “I double dog dare you”?

Creepiness aside, “Bloody Mary” is a solid episode, probably my favorite so far. Mirrors are a great tool in impressive cinematography, and the Supernatural creators used them to great effect here. The ghost lurking in mirrors as the camera follows the victim moving around, the mirror image of the victim not mirroring but accusing the victim, the final showdown in the attic filled with mirrors…simply stunning.

What really worked in this episode, however, was that Sam was in personal danger. Sure, the brothers often find themselves in danger facing down the creature of the week, but here, there was a chance that Sam could be a target of his own accord, not merely because he was seeking out the ghost. We learn that he had been dreaming about Jessica dying in a fire on the ceiling (that phrase never stops sounding ridiculous, but what can you do?) for days before it happened. That’s a doozy of a secret to have, because Sam was so very adamant about not caring about chasing down the thing that killed mom. Naturally, the guilt is eating him alive and giving him nightmares.

And so Bloody Mary has a reason to come after him — he feels guilty for Jessica’s death, so Mary can feel justified in causing his. Dean can’t help because Sam won’t tell him what the secret is, and yet he can help save his brother when it gets down to it. He doesn’t care what Sam thinks he’s done, he’s going to stick by him anyway. The writers weren’t pulling emotional punches in this episode, right down to the last moment when Sam sees Jessica standing on a street corner as they drive by…and then she’s gone.

I’m always looking for that point in a series when I say, “Okay, I’m sold. Give me everything you’ve got.” I hit that point with “Bloody Mary.” So let’s go, Supernatural. Bring it.

← Best of February
Giving in to the Mess →