← My Muse of the Week
Place Matters → 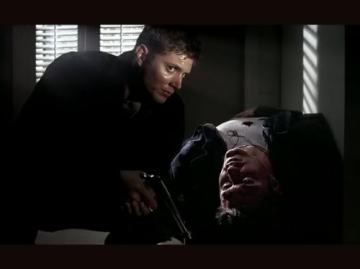 Here we have a pair of episodes that, together, demonstrate what in this show works and what doesn’t. Let’s begin with a look at Episode 6 (where a LOT works):

Creature of the Week: A shapeshifter who can shift into anyone and mind-meld with them, shedding the skin periodically in a gross and disgusting fashion and shifting into someone else. His favorite pastime seems to be to shift into a person and then torture and kill that person’s girlfriend. Lovely.

Body Count: 1, thought there were a couple of abortive attempts, and 2 if you count the shifter himself

Fake Credentials: Dean pretends to be an off-duty detective from Bisby, Arizona.

This episode has a clear theme: we all pretend to be something we aren’t sometimes. The theme is so clear, in fact, that it runs the risk of being too heavy-handed. Instead, it works very well in this episode, because each step of the story is carefully constructed to reinforce the theme without being repetitive and preachy.

Instead of a teaser involving unknown individuals in the grips of something horrifying, as per usual, the episode starts with a flash-forward teaser, the first in the series. It’s an effective one, because a girl is tied up and tortured, and when a SWAT team breaks in to stop the bad guy, he turns around and we see that it is…Dean. Yikes!

The teaser is effective because, really, we haven’t known these boys for long. We’re only in episode six. Who is Dean? We know he wants to find his father. We know he carried his baby brother out of a burning house. We know he’s a bit of a ladies’ man. We know he didn’t go to college. We know he hates to fly. But he’s got a sheen of clever wit and cocky bravado that could be covering up something, and we don’t yet know what that is.

Sam is more transparent as a character, at least it seems at first. He wears his emotions more baldly than his brother, and his motivations — for being in school, for chasing after his father — seems pretty clear. Of course, we’ve also recently learned that Sam is hiding the fact that he had dreamed about his girlfriend’s death before it happened, and that he sees her sometimes, so there might be more beneath the surface there, too.

The theme continues immediately after the teaser as the boys argue about whether or not to go visit Sam’s college friend, whose brother has been accused of murder. Dean thinks it’s a waste of time — not only going to do something that has nothing to do with their mission, but also keeping ties with college friends. He doesn’t see the point, since Sam has to lie to them anyhow, pretending to be something he isn’t. Sam is stubborn about it, and they go visit the pretty blonde Becky (remind me to complain at some point that there always has to be some pretty girl involved), who insists that her brother could not have tortured and killed his girlfriend. Not only would he never do a thing like that, he was with Becky at the time of the murder.

Turns out, the brother didn’t do it at all. There is a shapeshifter around, and he has made a habit of shifting into the body of a man and then torturing and killing that man’s girlfriend. Sam and Dean hunt him, and guess what? The shifter captures Dean and turns into him.

I rather liked that Sam wasn’t fooled by the shifter at all. He knew it wasn’t Dean, but it didn’t do him any good once he got clocked on the head and taken to the shifter’s sewer-lair. There, the theme kicks up again as the shifter reveals that he can mind meld with Dean, and begins to rant at Sam about all of Dean’s resentments: Sam got to go to college, gets to have real friends, while Dean is all alone, etc. etc. etc. Turns out, Dean has been pretending to Sam as well.

Then there’s a round robin of “who is the shapeshifter now,” as the shifter goes to see Becky as Dean (revealing that he really just wants to be normal…just like Sam!), tortures her, nearly gets caught, and then turns into her in order to fool Sam when he comes to make sure she’s okay. Then he turns back into Dean and he and Sam have a fight. The Dean fights with himself, leading to the screenshot up above. All delightful, and reinforcing the frightening nature of the shifter: it can be anyone, at any time. Just like serial killers.

At the end, Sam is able to be honest with Becky about what he’s doing (since she saw it all with her own eyes), and feels a bit lighter for the fact that he isn’t pretending with at least one real friend.

So, what works here? The clear theme works. The scary nature of the shapeshifter works…it’s not just a beast, it’s a beast that hides. The furthering of the relationship between the brothers works. And the cool tricks that could be played with having Sam and Dean apparently fighting and Dean and Dean fighting work.

Um…and since Dean is now declared dead, I really hope that comes back to cause problems or solve them in the future…

Much less successful is the next episode, in which a preacher’s daughter wants to punish people:

Creature of the Week: Ghost of a long dead preacher who has a hook for a hand, seems to be the origin of the Hook Man legend, and is preying on people using the emotions of the preacher’s daughter as fuel and direction.

While the theme in “Skin” was clear, the theme in “Hook Man” is much muddier. In fact, I’ve been thinking about it for a while, and what I’ve come up with is this: be careful what you wish for. But I don’t think that’s it.

In this episode, we have a pretty preacher’s daughter who is unknowingly summoning the Hook Man to punish people who are doing bad things. She goes out on a date with a boy, and when he gets a little fresh, the Hook Man comes along and slaughters him. The girl’s roommate is a bit of a wild child, and the gets killed in her sleep (though I didn’t find a specific instance of what she had done wrong in that moment that would cause the girl to want her punished). The preacher himself is having an affair, and the Hook Man comes after him (though he is stopped by Sam). Finally, when the girl realizes she’s behind the attacks, she feels like she should be punished and the Hook Man comes after her.

The why and how of this creature were a little baffling in this episode, and it’s the first one where the mythology felt sloppy to me. It’s the roommate’s death that bothers me most, because I can’t think of why the girl would want her punished at that time. In addition, I understood that the girl had gotten the necklace that was the Hook Man’s source of power when she left for college, but why weren’t there other attacks before that by whomever else had the necklace?

Aside from that, there was the awkwardness of Sam having an interest in this girl. While it was a nice change of pace from Dean salivating over her, it felt too soon after Jessica’s death, especially if Sam is still dreaming of Jessica. Thankfully, Sam himself realizes it’s too soon, but even the glimmer of interest rang false for me.

Finally, the last thing that didn’t work in this episode was how easy it was for the boys to get their information. Having a wealth of internal information about various creatures is fine. Finding clues and following them is fine. In this episode, they suspect it’s the Hook Man and decide to try to find the source of the ghost by digging through old records manually. Seems awfully convenient that they find exactly what they are looking for, step by step. They find out who he is, where his body is buried (in an unmarked grave somewhere), what happened to his hook, and other things way too easily. Buffy and Angel suffered from this a bit, but there, they weren’t digging through unfamiliar town historical records that seem much too thorough to be real.

← My Muse of the Week
Place Matters →